With temperatures soaring past 100 degrees for the past week it's been easier to stay indoors and wrap up projects such as writing, organizing, and thinking. It's the thinking that has been at the forefront of my days of late. Quieting the mind has been a challenge as I've been contemplating life, my personal journey and the road that waits ahead. Our community has lost several people this past week; a 12-year-old local boy drowned in our river, a 35-year-old motorcyclist was hit by a tourist with an RV trying to make a U-turn on the highway, and the passing of a friend from the Ridge. Life is temporary, uncertain, and precious. When it hits you that you may have only so many more 100 degree summers left, the heat becomes much more tolerable. Yet it has had me really wondering about my own life's purpose and in what direction I want to set my sails for the future. Life suddenly seems short.

I watched a video recently about a fellow who was living his life's passion and has created a successful KickStarter campaign to fund it. It's a video about the cicadas. (Watch below - film maker Samuel Orr - He's started a Kickstarter page to raise $20,000 for the project.)

As a young girl growing up in the Texas Panhandle, summer's always meant thunder storms, hot weather, and tornadoes and you could almost mark the calendar for the day the Cicadas came to town. They'd show up in groves, attaching themselves to the bark of the trees that lined my grandparent's property and were almost within reach of my bed at night. I'd listen to their melodical music as I'd try to fall asleep on those hot summer nights and today as I think about their journey, and my own, it seems appropriate to share their story...

They’ve been waiting, 17 years. But on a warm night in spring their journey begins. For a lifetime they’ve been underground, alone. But night after night they emerge together, as billions of cicadas gather into one of the greatest insect outbreaks on earth.

They cannot bite or stink and their only defense is to emerge in the millions. But above all, they climb, to seek a secure perch on which to transform. And so they begin the final few weeks of their 17-year lives.


For the first few days, the new adults rest and recover, waiting for their shells to harden. Soon after, the males begin calling the females. Their synchronized chorus is among the loudest sounds in nature. The mating frenzy 3 to four weeks, but after the first appears but not all survive long enough to find a mate. And billions do survive to find a mate. Soon after the females lay eggs and post hundreds on eggs in tree bark. Their purpose now fulfilled after a life span of 6 weeks. But up in the trees, hidden in the branches are billions of eggs about to hatch, each about the size of a grain of rice. They crawl to the edge of the branch and drop away. Insects force them to burrow underground, not to be seen again for another 17 years.

Life is really short for these insects; much shorter than my own decades of life, not to mention they are waiting underground for 17 years in the hopes that they might be one of a few who will fulfill their life's purpose to mate, reproduce, lay eggs and then die within a few short weeks. So what do I have to be concerned about?

My shell has hardened, my song has begun, and I have a beautiful community around me, so I think I'll go outside and do some living now. Triple digits be damned!


include Dream Big! and Creating Wealth on The Web. Through many challenges that she has


faced, survived and overcome, Cynthia knows first-hand how to dream big and has dedicated her life to empower other’s to stand-up, step-out, and reach their dreams. She can be reached at

Posted by Unknown at 6:14 PM No comments:

Late night conversation with my granddaughter. 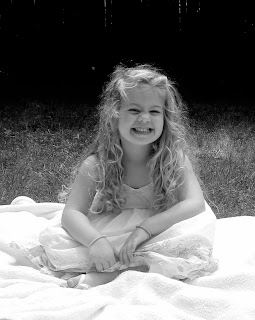 "MiMi, where is Grandpa?

I'm not sure but I think he's in a place called heaven.

MiMi, where is heaven?

Honey, I don't know for sure.

It must be really far."

(The wisdom of a three-year-old.)

As some of you know I’ve recently been inspired to clean out and get rid of things that no longer serve me and get them to people who can use these items. You know the likes – boxes of clothing a size too small that one-day will fit again, or coats for skiing when one no longer skis. These things are no longer of value to me, but for another person, it’s just the item they need. It’s been gratifying to let go of these things I’ve clung on to for so many years and to watch as they go to people who really need and appreciate them.

And then there are those things that you forget about, things that have incredible meaning and value, even if only to you. One of the things I found in a storage container last week was the top of a pair of men’s pajamas. They belonged to my late husband, Calvin. Although it’s been nearly 18 years since he passed away, I still remember buying him those pajamas and how he wore them those last two months until the day he died. Green and navy stripes with small red squares that look a bit like a Scottish tartan. Silky fabric.  Floods of memories…

Recently I came down with what I can only think is the flu as I was knocked down into bed for the past 48 hours. I pulled the top out of the drawer and wore it these past two days but it was only today I noticed it… the thing that knocked me down again, this time to my knees in tears. It was so small I might have missed it. A tiny pin attached to the lapel. I couldn’t see it clearly with out my glasses buy it didn’t matter. I knew immediately what it was and when it found it’s home on my husband’s pajamas, and why. 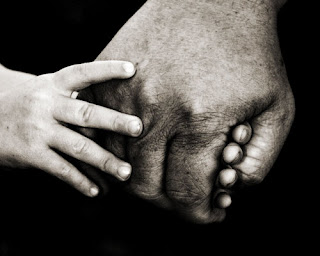 My husband was a good husband and father. His children adored him, all of them, but he had a special relationship with our youngest son, Tyler who was born seven years after our last child. Being older parents perhaps we were more prepared to enjoy him than when we were both working full time and trying to raise several children. Anyway, I digress… The pin.

Tyler had barely turned six-years-old when his dad was diagnose with terminal cancer. He watched, as we all did, his hero shrivel up and disappear. It was hard times for everyone. Dark days. But a light in everyday was when little Tyler came home from school. I could hear him as he ran up the stairs into his father’s bedroom every afternoon. “Hi Daddy”, he would say softly putting his tiny hand on his daddy’s shoulder. Cal would awaken from his near constant sleep and smile. “Do you need some fresh water Daddy?” he would ask. “Yes please,” Cal would respond.  And so it would go day after day.

One day Tyler ran up the stairs to his Daddy’s bedroom and he couldn’t wake him up, so instead he placed his new Boy Scout pin, Bear Cats, on the lapel of his daddy’s pj’s. “So he’ll know I was here,” he said with a smile.

Today, laying in this bed for the second day in a row I noticed this small pin on the pajamas I was wearing and a flood of memories washed over me—some heart wrenching, some sweet.

Life has a way of moving on when you aren’t watching. It’s astounding to me that in less than a month it will have been 18 years since Calvin died. That sweet boy Tyler now has a sweet son of his own.

I’m thankful for the memories, the good ones and the hard ones.  I’m thankful for a husband who gave me a beautiful family and a good life and in spite of all the stuff I’ve uselessly held on to for so many years, I’m thankful today I kept this silky pajama top and the pin my son placed on it 18 years ago.

© Cynthia Stewart is an international speaker and the author of many books, which
Include Dream Big! and Creating Wealth on The Web. Through many challenges that she has fought and won, Cynthia knows first-hand how to dream big and has dedicated her life to empower other’s to stand-up, step-out, and reach their dreams. She can be reached at www.cynthiastewart.com

PLEASE REFER THIS NEWSLETTER
Thank you for your efforts. Please forward this newsletter in its entirety to all you know who could benefit and encourage them to sign up! Subscribe to cynthia@cynthiastewart.com, with "subscribe dream big" in the subject.
Posted by Unknown at 10:39 AM No comments: